Amman and Aqaba airports in the next year.

schedule, which includes 11 routes to Amman. We are delighted to strengthen our cooperation with the

Jordan Tourism Board. This new route to Malta further promotes Jordanian tourism and will introduce

guests from a twelfth European country to one of the most attractive tourist destinations in the world.

To celebrate we are releasing seats for sale on these routes from just €14.99, for travel in January 2019,

which are only available for booking until midnight Thursday (8 Nov). Since these amazing low fares will

be snapped up quickly, customers should log onto www.ryanair.com and avoid missing out.”

Kingdom, which made Jordan an accessible and affordable destination to the European tourist. By

adding heritage-rich Malta to its European fleet to and from Jordan on bi-weekly basis, Ryanair is

introducing time-old, yet modern, Jordan to new travellers, which would reflect positively on the local

economy due to this touristic surge that will activate the service industry: hotels, restaurants,

transportation and car rentals, just to name a few.” 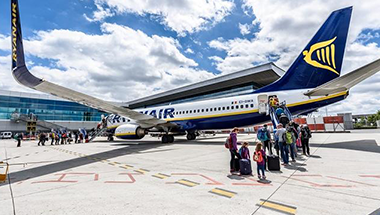